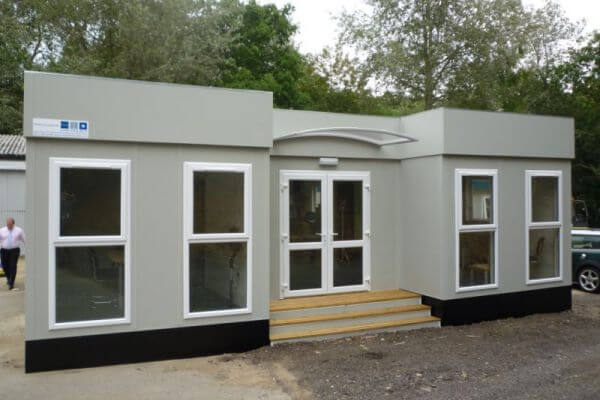 We are very pleased with our spacious new offices. Moving the old cabin for us whilst the crane was on site was an added bonus. Impressive service!

The facilities manager for ACS International Schools first contacted us after Google searching for a substantially upgraded replacement for their old jack leg cabin. He was looking for new and enlarged offices for his facilities department. We spoke at length to accommodate their particular requirements for a building large enough to accommodate eight to twelve staff within an open plan office setting. There needed to be a separate office for the facilities manager, and an eight person meeting room.

We provided a full quotation with diagrams and elevations within 48 hours. After initial approval we attended the school to conduct a full site survey.

At our meeting the facilities manager requested that we provide a full turnkey package, and that we also move the original jack leg cabin for them. He indicated that he preferred our building’s external appearance to that of the other major modular building supplier we competed against. He also much preferred our Health and Safety package.

After winning the competitive cost / benefit analysis, we were quickly issued with an order. The company had requested a very short delivery date, which we were able to achieve. The building was delivered a mere three weeks later, as requested.

We arrived on site at 6am, moved the existing building as requested using our hired crane, and moved on to our JackPad foundation preparation so as to be ready for the three modules. All the modules were put in place by 2pm, and our further three days on site were occupied completing the sealing, the electrical installation, the external skirt and the carpet tiles.

Our project manager and site installation team were particularly praised for the professionalism and thoroughness of the whole installation process.

We were pleased that another client was, as we expected, highly delighted with their new building.

END_OF_DOCUMENT_TOKEN_TO_BE_REPLACED

Charities we work with

Portable Building Sales Ltd are proud members of the
Modular & Portable Building Association.
Scroll back to top
This site uses cookies to analyse traffic and for ad measurement purposes. Learn more about how we use cookies.OK